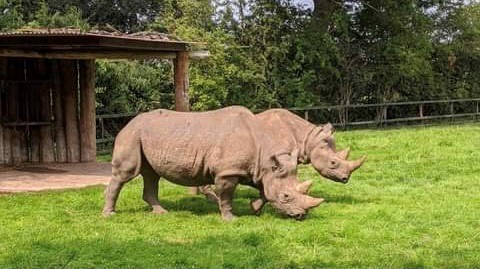 I had started my PhD and been on campus for roughly 2 months when the U.K. first went into lockdown in March 2020. As the situation developed, and it became evermore clear we were in this for the long haul, I began to adapt my project to enable the progression of my research from home. To help with this, I applied for and was awarded the Research Support Award in June, enabling me to begin my sample collection in a COVID-safe manner.

To many people, science is still seen as a fancy career choice, including visions of people wearing white coats in shiny laboratories. While this can be the case, this story misses out the less glamorous details… which, in my case, involves handling animal poo (and storing it in a freezer at home!). My research focusses on examining the link between conservation in situ – where conservation action is undertaken in an animal’s natural habitat – and ex situ – where an animal is maintained away from its normal habitat (e.g. in a zoo), using applied genetic techniques, within several candidate species: black rhino (Diceros bicornis), white rhino (Ceratotherium simum), mountain bongo (Tragelaphus eurycerus isaaci), giraffe (Giraffa camelopardalis) and Grévy’s zebra (Equus grevyi).

First, a little bit of background. For decades, the conservation community has aimed to create a connected approach to conservation, linking together in situ conservation with ex situ organisations and academia. The overall objective of this was to streamline conservation action, with many smaller populations of animals being managed as one whole, large population – or metapopulation management. Ideally, this would mean that both ex and in situ populations are maintained at maximum genetic health, with gene flow (the exchange of genes between populations) managed sustainably, to reduce the chances of issues such as inbreeding or speciation from occurring. This is the idea behind my project: by using applied genetic techniques, can we measure the efficacy of an integrated conservation approach so far?

One key metric I will be looking to measure is genetic diversity, within in situ populations in Kenya and ex situ populations in U.K. zoos. Genetic diversity is important when looking to maintain healthy populations, especially when you only have a small number of individuals. Records of lineage can help to maintain genetic diversity, by ensuring related animals don’t breed together. In zoos, this is managed by periodically moving breeding animals between collections. However, while this information is incredibly helpful, it doesn’t give deeper information into the differences in the genes themselves. Genetic testing, looking for changes in the genetic code which cause diversity in physical features, can supplement the records we already hold to manage captive breeding. This can be especially important within in situ populations, who may live in fenced reserves for their own safety, and cannot facilitate gene flow naturally (i.e. through dispersal to find other individuals).

Genetic testing has also aided in the identification of nine subspecies within the giraffe species. Research into giraffe (sub)species classification is still ongoing, but for now, we believe there is one species of giraffe with nine subspecies. Before this discovery, giraffes in zoos were bred with each other. We now know that some individuals will have bred with an individual of a different subspecies, and some zoos maintain hybrid animals in non-breeding herds. Knowledge of which individuals are hybrids allows us to avoid including these animals in breeding programmes and ‘diluting’ subspecies. The genetic data from this investigation, too, can be used as an identification tool for in situ hybrids, where hybridisation is rare but has been seen.

To maintain genetic diversity both in and ex situ, animals must be moved between captive and wild settings, and between different national parks/reserves and zoos. The practice of moving animals in situ is known as translocation, and has been used for decades to achieve different aims, such as economic goals or the maintenance of genetic diversity. To make this process safer for the animals and practitioners, animals are sedated, often with the use of at least one opioid drug. Research has shown that, in humans and horses, differences in the genetic code of two specific genes believed to be implicated in opioid uptake and metabolism can alter an individual’s tolerance to opioid drugs. Little research has been conducted into this within rhinoceros species and Grévy’s zebra; we know that opioid drugs create different side effects in different individuals, and that a dose that may sedate one animal may barely affect another, but we know little about the genetic basis of this variation. The effects of opioid overdose can be deadly, but how can you know if the dose you have measured is likely to cause overdose? The discovery of changes in the genetic code between individuals, and understanding the effects of these changes, may aid in the development of personalised dosage regimes and reduce side effects and mortality.

What does all of this have to do with the Research Support Award? Well, due to the localised travel rules enforced during the lockdowns, it hasn’t been possible to travel to zoos within the U.K. to collect samples from individual animals. The Research Support Award allowed me to buy collection materials that can be posted out to zoos, and returned via Royal Mail, enabling the remote collection of faecal samples from across the U.K. during the lockdowns. I think we’re all hoping that soon we will begin to see some semblance of normal life again; until that point, in the home freezer, fresh from the postman, my samples will stay.

Anita is a PhD researcher in the Department of Natural Sciences, studying the conservation genetics of endangered African herbivores. Follow Anita on Twitter (@anitahasmi_) for updates on her research.

Anita was a recipient of a Manchester Met Graduate School Research Support award. The next deadline to apply for an RSA is Friday 26 March 2021 at 5pm.